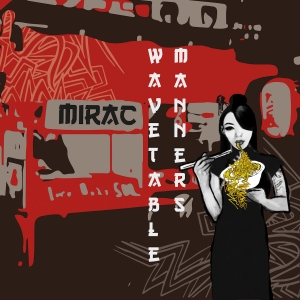 “Wavetable Manners” is the first beat EP by the Viennese producer and sound designer MIRAC. The release boasts five tracks, on which you can find not only hard hitting dubstep bass lines but also – like the name suggests – catchy synthesizer melodies: “Wavetables” are the sound source of synthesizers. “Wavetable manners” are table manners for producers, says MIRAC. These are characterised by uniquely created synth-sounds, an absence of samples, as well as a sound designers affinity for clean sound and a love for detail. MIRAC found additional inspiration during the Red Bull Music Academy where he was able to meet producer legends such as Just Blaze, Mikewillmadeit, or Kaytranada. “Wavetable manners” is able to gracefully bring together influences from Trap all the way to Grime and UK Basssound, thereby not only bringing fresh air, but also an international flair into the domestic producer scene.